Theo Walcott could never really play a very influential role for Arsenal in this season and this was due to injuries as the English player struggled just trying to stay in shape.

Arsene Wenger utilized the services of Walcott in 14 occasions as it was the amount of matches that the 26 year old player appeared in for Arsenal. This is a low quantity of appearances for a player who is or was being viewed as one of the most promising figures in the world of football but even though Theo Walcott did not play a very significant role in this season, Arsene Wenger announced that he has big plans for Walcott.

According to Arsene Wenger, the French manager believes that Theo Walcott is old and good enough to play in the middle of the pitch and it might be his new position for the next season. 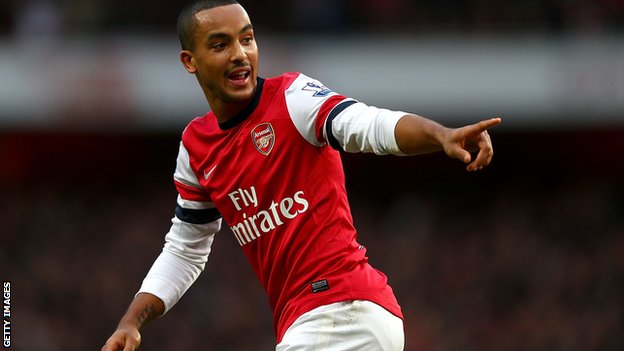 Arsenal’s Arsene Wenger told the media: “He’s the right age to play through the middle. He’s 26 years old; it’s a good age for a footballer. I wish that he stays free of injuries now. He had a few downs on the injury front and that’s never good. You have to be consistently present to express your full potential.”

A few days before the Premier League reached it’s end, Arsene Wenger stated that he wanted to finish it on a high note and that is exactly what happened as Arsenal defeated West Bromwich Albion with a final scoreboard of 4-1 and 3 of those goals arrived from Theo Walcott as he sealed a hat-trick.

Theo Walcott scored 3 times in the first half (a rare act that could have netted you 500 if you’d used your sports betting bonus at bet365 – it was 50/1!) Jack Wilshere also managed to find the back of the net meanwhile Gareth McAuley tried to put West Bromwich Albion back on track as he scored a goal but despite his best efforts, it was Arsenal which won the match with a comfortable result of 4-1.