Posted on January 31, 2018 by Leroy | Comments Off on Wenger Defends Arsenal’s Tactics after 3-3 Draw with Liverpool

Arsene Wenger went on to defend his team in the 3-3 draw at Liverpool. The Frenchman saw his team go down 1-0 at the break to an early goal from Philippe Coutinho, but the gunners were able to get a valuable point in a 3-3 draw. Still, many saw this as points dropped at home. There were also concerns about Liverpool’s defence since they had allowed a lead to go away. Roberto Firmino came up with a late equaliser in order to make sure that Arsenal were unable to win this for match. Up until that point, Arsenal were on a high after having overturned a 2-0 deficit into a 3-2 position.

Alexis Sanchez, Granit Xhaka, and Mesut Ozil were the players who turned down the mood for Arsenal. Wenger was asked about the possibility of running down the time and holding onto the lead, as the gunners failed to do both in a critical situation. Firmino was able to come up with an equaliser in the 71st minute. Goals from Coutinho and Mohamed Salah were crucial in putting Liverpool ahead in the game. This poor result means that Arsenal have been able to take just a single win – a close 1-0 win over Newcastle – in the recent league match.
END_OF_DOCUMENT_TOKEN_TO_BE_REPLACED

Posted on June 23, 2017 by Leroy | Comments Off on Arsenal in advanced negotiations to sign CSKA Moscow midfielder

Sports.ru suggests that CKSA Moscow are close to finalising a £10m agreement which will see Golovin commit his future to the Gunners.

The 21-year-old made his debut for the Russian heavyweights during the 2015/16 campaign, and it was left season where he really made a mark with the Capital outfit. The youngster notched three goals and three assists in 30 outings for CSKA, who finished runners-up to Spartak Moscow for the league title.

Golovin is capable of plying his trade at either central midfield or on the left flank, and CSKA are likely to propose to take him on loan next season as part of any agreement. Meanwhile, there is the other option of the player linking up with Hull City, who are currently under the management of former CSKA boss Leonid Slutsky.

Arsenal are already crowded with players with creativity in the midfield department, and the club are more concerned over the striking department which needs an upgrade ahead of the new campaign. As a result, a temporary move could so well with Golovin, who could become the Gunners’ first Russian signing since Andrey Arshavin in 2009. END_OF_DOCUMENT_TOKEN_TO_BE_REPLACED

Posted on June 2, 2017 by Leroy | Comments Off on ARSENAL TO VISIT SOUTHAMPTON MIDWEEK 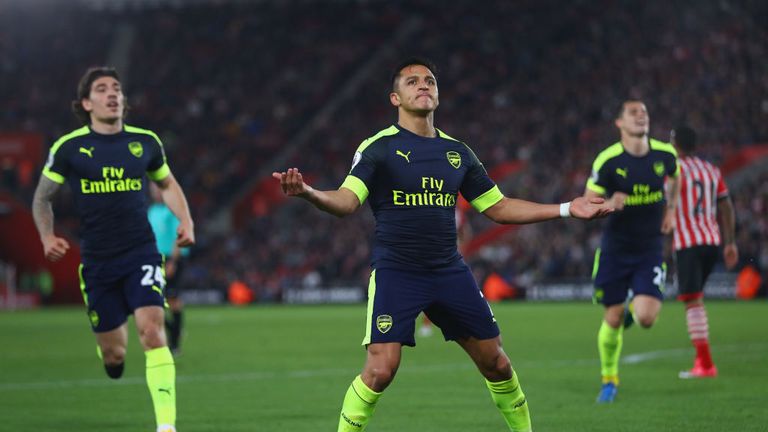 Arsenal are still riding on the waves of their Manchester United victory and the confident boost might lift them against Southampton. Southampton lost to Arsenal in the FA Cup and this seems like a perfect opportunity for revenge as Arsenal need the result more. END_OF_DOCUMENT_TOKEN_TO_BE_REPLACED

Comments Off on ARSENAL TO VISIT SOUTHAMPTON MIDWEEK He says that it is one of the biggest achievements of the manager, as it is becoming increasingly hard in order to qualify for the Champions League every year. Only the top four teams are eligible to qualify for the competition. Liverpool and Manchester United have certainly learned in recent years that it is not easy to finish in the top four by any means. END_OF_DOCUMENT_TOKEN_TO_BE_REPLACED

One of Arsenal’s largest shareholders, Alisher Usmanov, says that Arsenal should consider retaining Arsene Wenger at all costs.

Recent discontent amongst fans has seen a campaign against the Frenchman calling for him to leave the club at the end of the campaign. This is after yet another faltering league title challenge. The club has been looking like being capable of winning league titles only to falter massively at some stage in the season. Often, the club leave themselves with a huge distance due to poor early-season form or end up throwing away the title at the business end of the campaign.

The 2015-16 campaign is reflecting the latter since Arsenal were leading the table towards Christmas. They have since fallen way behind and are 11 points behind table leaders Leicester City. After being knocked out of the FA Cup and the Champions League, the club are set to finish trophy less once again. Arsenal fans have seen their club win a major honour only twice in the last decade. Those two successes came in the FA Cup with many blaming Wenger as the reason for failing to mount a title challenge.Usmanov, who is still hoping to become the sole owner of Arsenal, gave his views about retaining Wenger. END_OF_DOCUMENT_TOKEN_TO_BE_REPLACED

Posted on February 26, 2016 by Leroy | Comments Off on Arsene Wenger has rejected claims that Liverpool could be without a number

Arsene Wenger has rejected claims that Liverpool could be without a number of players when they are up against the gunners this weekend.

Jurgen Klopp has been complaining about the long list of injuries that his team has suffered in the last few weeks. The likes of Philippe Coutinho and Dejan Lovren are out for a considerable amount of time. This is in addition to the ever present injury problems for striker Daniel Sturridge. A number of young players from the youth team were picked for the recent FA Cup match against Exeter City by Klopp.

The former Borussia Dortmund manager says that he could adopt a similar policy for the replay at Anfield after the two teams could only manage a 2-2 draw. Liverpool’s inability to perform against the lower teams has been an issue underKlopp. However, they have alternatively managed to raise their games to new levels against the top teams. Wenger expects a very tight contest at Anfield this weekend. There is a possibility of Arsenal going five points clear at the top or they could succumb to pressure and suffer a loss on this away trip. The next few weeks could be a major test for Arsenal since they not only take on Liverpool but also Chelsea. END_OF_DOCUMENT_TOKEN_TO_BE_REPLACED

If you had to bet ahead of the last weekend’s Arsenal versus Liverpool fixture, you definitely would have put your money on the Gunners as they were playing at home and their form leading to the fixture was better. But, it was hard to predict that the match was going to be as one sided as it happened to be.

Arsenal were leading 4-1 when the proceedings came to an end with the final whistle of the referee. END_OF_DOCUMENT_TOKEN_TO_BE_REPLACED

Comments Off on EMPHATIC WIN