Posted on March 25, 2017 by Leroy | Comments Off on ARSENAL CHARGED FOR FIELD INVASION 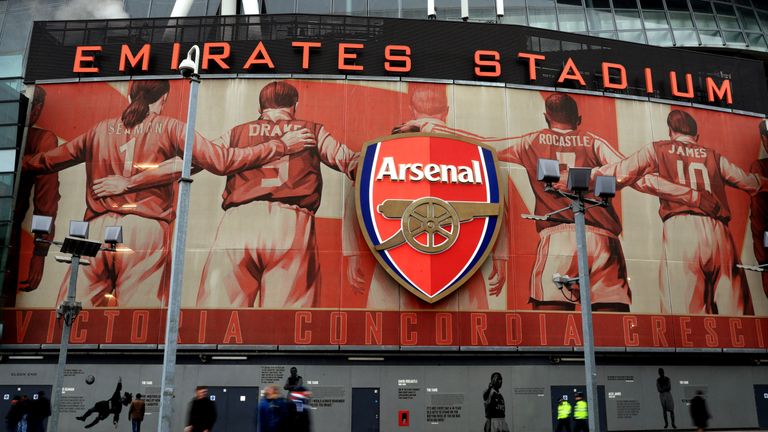 Bayern Munich qualified for the last eight of the tournament, with goals from striker Robert Lewandowski, wingers Arjen Robben and Douglas Costa and a brace from former Juve player Arturo Vidal. They join Real Madrid – who dispatched Napoli 1-3 in Italy – to go onto the next stage. END_OF_DOCUMENT_TOKEN_TO_BE_REPLACED

Comments Off on ARSENAL CHARGED FOR FIELD INVASION

Arsenal hit back at critics with victory

Posted on March 21, 2016 by admin | Comments Off on Arsenal hit back at critics with victory

After what has been a difficult period for Arsenal following exits in both the Champions League and FA Cup in recent weeks, manager Arsene Wenger will have been delighted with his side’s dominant display at Everton on their way to a 2-0 victory this past weekend. With sections of the Arsenal faithful again calling for changes to be made in the light of recent events, Wenger has come out spiritedly, even stating that his side still have title aspirations, despite being eleven points behind leaders Leicester City. END_OF_DOCUMENT_TOKEN_TO_BE_REPLACED

Comments Off on Arsenal hit back at critics with victory

END_OF_DOCUMENT_TOKEN_TO_BE_REPLACED

Arteta confident that the Gunners can turn the corner

Posted on March 13, 2014 by deke | Comments Off on Arteta confident that the Gunners can turn the corner

Arsenal midfielder Mikel Arteta believes that winning a trophy would be a huge turning point for the club, according to the Daily Star.

The Gunners crashed out of the Champions League on Tuesday evening, after losing their two legged tie with holders Bayern Munich by three goals to one, but they still have an outside chance of clinching the Premier League title, and booked their place in the last four of the FA Cup by beating Everton last weekend.

END_OF_DOCUMENT_TOKEN_TO_BE_REPLACED

Posted on March 10, 2014 by deke | Comments Off on Arsenal set up semi-final against holders Wigan

Arsenal remain on course to end their trophy drought after booking their place in this seasons FA Cup semi-finals with a fine 4-1 win over Everton at the Emirates Stadium on Saturday afternoon.

Mesut Ozil ended his goal drought to put the host in front on seven minutes with a composed finish, only for Romelu Lukaku to draw the visitors level just past the half-hour mark.

END_OF_DOCUMENT_TOKEN_TO_BE_REPLACED

Comments Off on Arsenal set up semi-final against holders Wigan

Wilshere out for six weeks

Posted on March 7, 2014 by deke | Comments Off on Wilshere out for six weeks

Arsenal host Everton in the quarter finals of the FA Cup, looking to keep alive arguably their best chance of ending their trophy drought, which stands at nearly nine years.

They are currently four points behind Chelsea in the race for the Premier League title, a gap which will be extended furthermore if they Blues avoid defeat against Tottenham Hotspur at Stamford Bridge while they face the mammoth task of overturning a two goal deficit against Bayern Munich in the last sixteen of the Champions League.

END_OF_DOCUMENT_TOKEN_TO_BE_REPLACED

Comments Off on Wilshere out for six weeks

Posted on February 24, 2014 by deke | Comments Off on Arsenal ease past Sunderland to stay second

Arsenal have kept the pressure on Premier League leaders Chelsea after thumping relegation threatened Sunderland 4-1 at the Emirates Stadium on Saturday afternoon.

The Gunners took the lead after just five minute through Olivier Giroud before the France International, who sat out of the 2-0 defeat to Bayern Munich on Wednesday evening, doubled the host’s advantage just after the half-hour mark.

END_OF_DOCUMENT_TOKEN_TO_BE_REPLACED

Comments Off on Arsenal ease past Sunderland to stay second

Posted on February 17, 2014 by deke | Comments Off on Arsenal through to FA Cup quarter finals

Arsenal kept their hopes of winning this season’s FA Cup alive by beating Liverpool 2-1 in the fifth round at the Emirates yesterday afternoon.

The Gunners, who were thumped 5-1 by Brendan Rodgers’ men at Anfield eight days earlier, took the lead on sixteen minutes through Alex Oxlade-Chamberlain, with Lukas Podolski doubling their advantage two minutes into the second half.

Steven Gerrard pulled one back for the visitors from the penalty spot just ahead of the hour mark, though they could not find an equaliser.

Arsene Wenger’s men will now face Everton in the quarter finals at the Emirates, with the tie scheduled for the weekend of the 8th/9th of March.

However, they will first turn their attention to Wednesday evening’s clash with holders Bayern Munich in the first leg of their Champions League last sixteen tie.

The 20 year old, who looked set to secure a move to the Emirates during the winter transfer window, had also been linked with switch to Bundesliga rivals Bayern Munich though Heldt has denied that the European Champions tabled a rival bid.

Comments Off on Arsenal through to FA Cup quarter finals

Posted on February 11, 2014 by deke | Comments Off on Giroud: Lloris keen on Gunners move

Olivier Giroud has said that his international teammate Hugo Lloris is keen to join Arsenal from North London rivals Tottenham Hotspur, according to the Metro.

The Gunners top scorer is close friends with the goalkeeper, who according to the striker is willing to make the controversial switch.

END_OF_DOCUMENT_TOKEN_TO_BE_REPLACED

Comments Off on Giroud: Lloris keen on Gunners move

Giroud and the Ox fit for Villa clash

Posted on January 13, 2014 by deke | Comments Off on Giroud and the Ox fit for Villa clash

Arsenal go in to this evening’s match against Aston Villa looking for the three points that will see them return to the top of the Premier League.

With the six sides below them all securing victories over the weekend, the Gunners will be keen to not lose their advantage over the chasing pack.

END_OF_DOCUMENT_TOKEN_TO_BE_REPLACED

Comments Off on Giroud and the Ox fit for Villa clash